The Elmora Troopers had to beat the best teams in New Jersey to win the State Championship before heading to Connecticut to play in the Mid-Atlantic Region Championship where they won the tournament, which qualified them to participate in the Little League World Series.  The Troopers were one of only eight teams from across the country to make it to the tournament and one of the final four teams in the United States bracket.

The Elmora Troopers are named after New Jersey State Trooper Thomas J. Hanratty #4971, who was killed in the line of duty on April 2, 1992 in a motor vehicle accident. Trooper Hanratty, born in Elizabeth, played in the Elmora League growing up. In honor of his memory, the Little League complex was renamed the Trooper Thomas J. Hanratty Memorial Complex in 1998 during a dedication ceremony.  The team wears his badge number, 4971, on their uniforms, and throughout the season played in his honor, often chanting his badge number for inspiration.

Governor Murphy, First Lady Murphy, and Colonel Callahan congratulated the players for their run to the World Series before the team was presented with shirts and caps, which display Trooper Hanratty’s badge number, 4971, and the Little League World Series patch.  After the ceremony, the team and their families were given a tour of the State Police Museum and Learning Center.

“The Elmora Troopers, New Jersey’s Boys of Summer, carried us all on their shoulders as they carried the memory of Trooper Thomas Hanratty on their sleeves,” said Governor Murphy. “With a Jersey Shake and an irrepressible spirit, they represented our state on the Little League World Series stage in the very best way possible. Their coach called their team a family – but we are even prouder to have them as part of our great and diverse New Jersey family.”

“This exceptional group of young players represented the very best of our state during their incredible run,” said First Lady Tammy Murphy. “Their teamwork, dedication, and love of the game in honor of Trooper Thomas Hanratty made all of New Jersey proud.”

“These young baseball players achieved glory that they and their many fans will never forget,” said Attorney General Gurbir S. Grewal. “They not only did themselves proud, they honored the proud legacy of Trooper Thomas Hanratty #4971!”

“This talented group of boys from Elizabeth, New Jersey managed to capture the hearts and minds of millions of baseball fans across the nation not just because of their grit and determination on field, but for their poise and grace off the field and for their collective belief that they were part of something bigger than themselves, which is the legacy of the Elmora Troopers Little League Team and memory of Trooper Thomas Hanratty,” said Colonel Patrick Callahan of the New Jersey State Police. “The Elmora Troopers showed the world just a glimpse of the amazing young people New Jersey has to offer—future leaders, maybe future baseball players, and hopefully future New Jersey State Troopers.  On behalf of the New Jersey State Police, I would like to congratulate the team on a terrific season.” 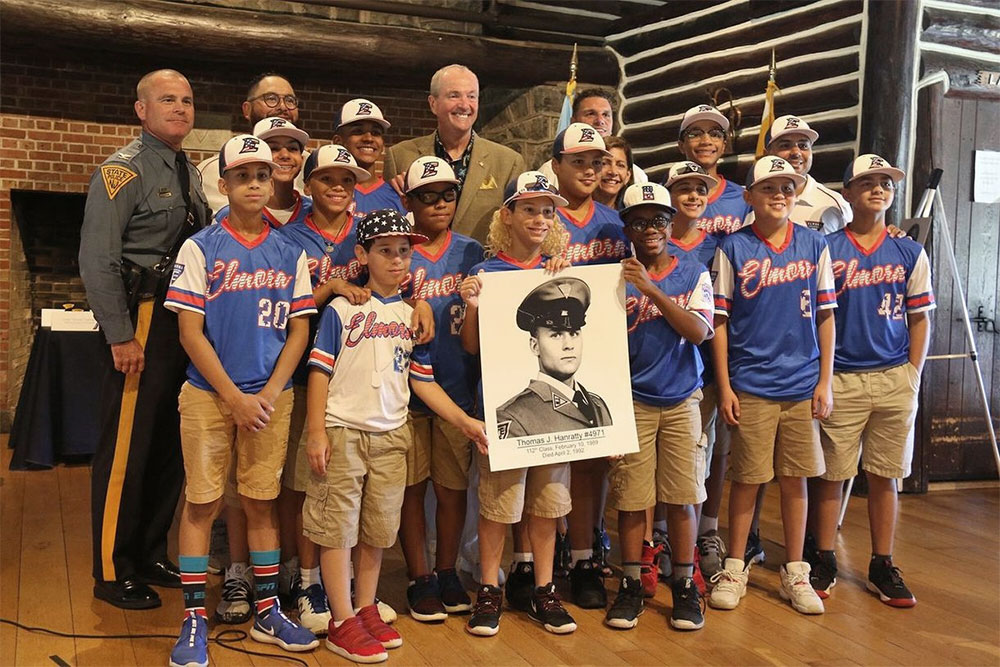