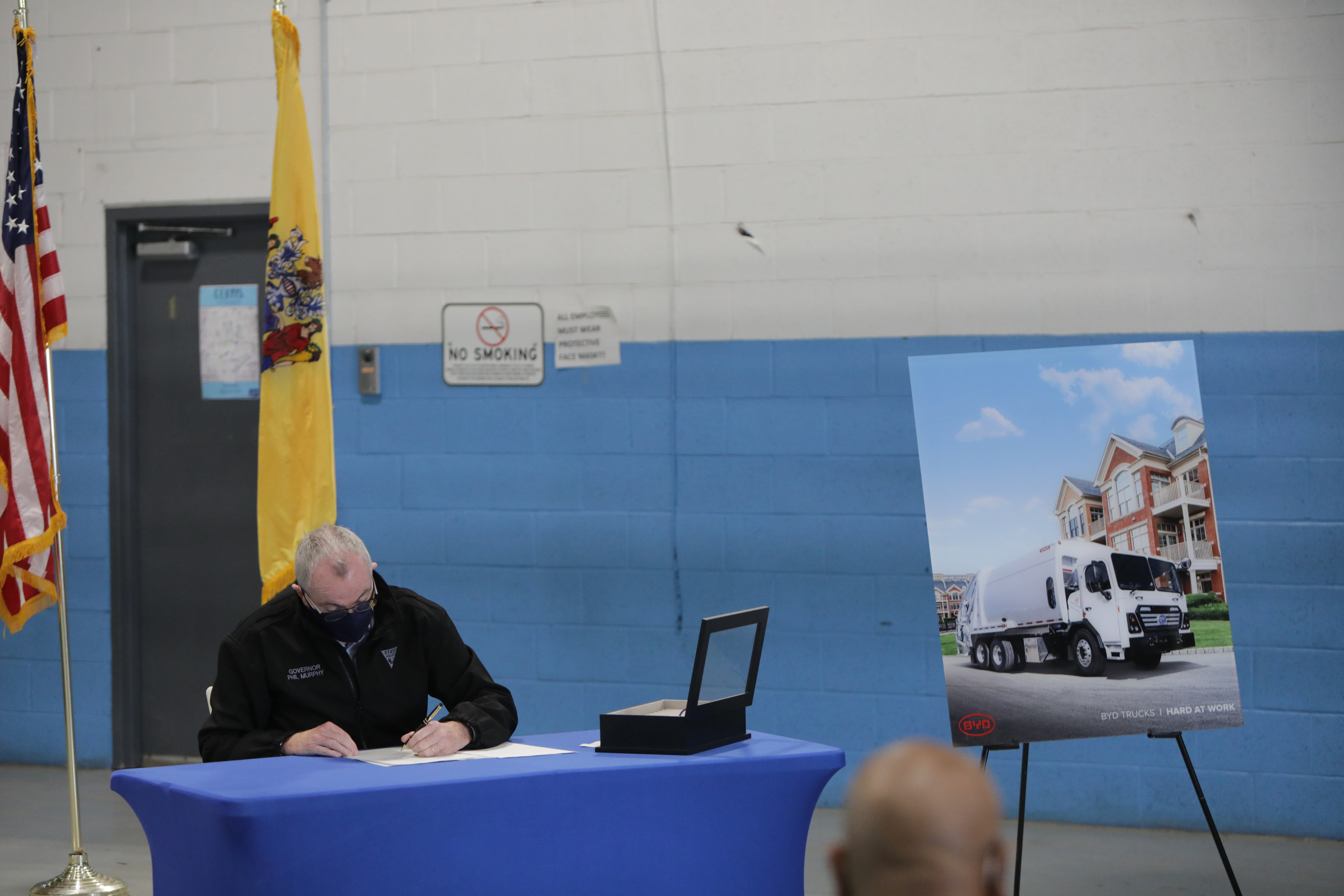 Governor Phil Murphy announced an investment of more than $100 million in clean, equitable transportation projects that will improve air quality and reduce the effects of climate change while moving New Jersey towards 100 percent clean energy by 2050. Leveraging proceeds from New Jersey’s participation in the Regional Greenhouse Gas Initiative (RGGI) and the Volkswagen Mitigation Trust Funds, this funding will bring electrification programs, equitable mobility projects, and electric charging infrastructure to environmental justice communities across the state.

“Climate change is the single greatest long-term threat currently facing humanity, and our state and economy are uniquely vulnerable to its devastating effects,” said Governor Murphy. “The investments we are announcing signify our commitment to environmental justice and equity, while building a cleaner economy that works for all. The newly created Office of Climate Action and the Green Economy, coupled with the New Jersey Council on the Green Economy, will use our trademark innovation and talented workforce to make New Jersey a national leader of the green economy. Together, these initiatives we will make New Jersey stronger, fairer—and greener—for generations to come.”

“Environmental justice is social justice. Investing in a green economy means we are creating a healthier, cleaner and more environmentally stable place for all New Jerseyans to live,” said Lt. Governor Sheila Oliver, who serves as Commissioner of the Department of Community Affairs. “Governor Murphy’s plan to address the immediate impacts of climate change on our communities prioritizes equity and sustainable growth to help ensure that everyone can participate in and benefit from a green economy.”

“New Jersey’s leadership in the green economy will to benefit both the health and financial security of New Jerseyans for generations to come,” said First Lady Tammy Murphy, Honorary Chair of the New Jersey Council on the Green Economy. “The New Jersey Council on the Green Economy will help us chart a path forward toward that reality, while ensuring that the wealth and opportunity generated from these initiatives both benefits and reflects the diverse communities of our state. This effort is more than a jobs program or set of environmental regulations – it is a partnership between generations designed to prepare a skilled and innovative workforce of the future, ready to lead New Jersey and the nation.” 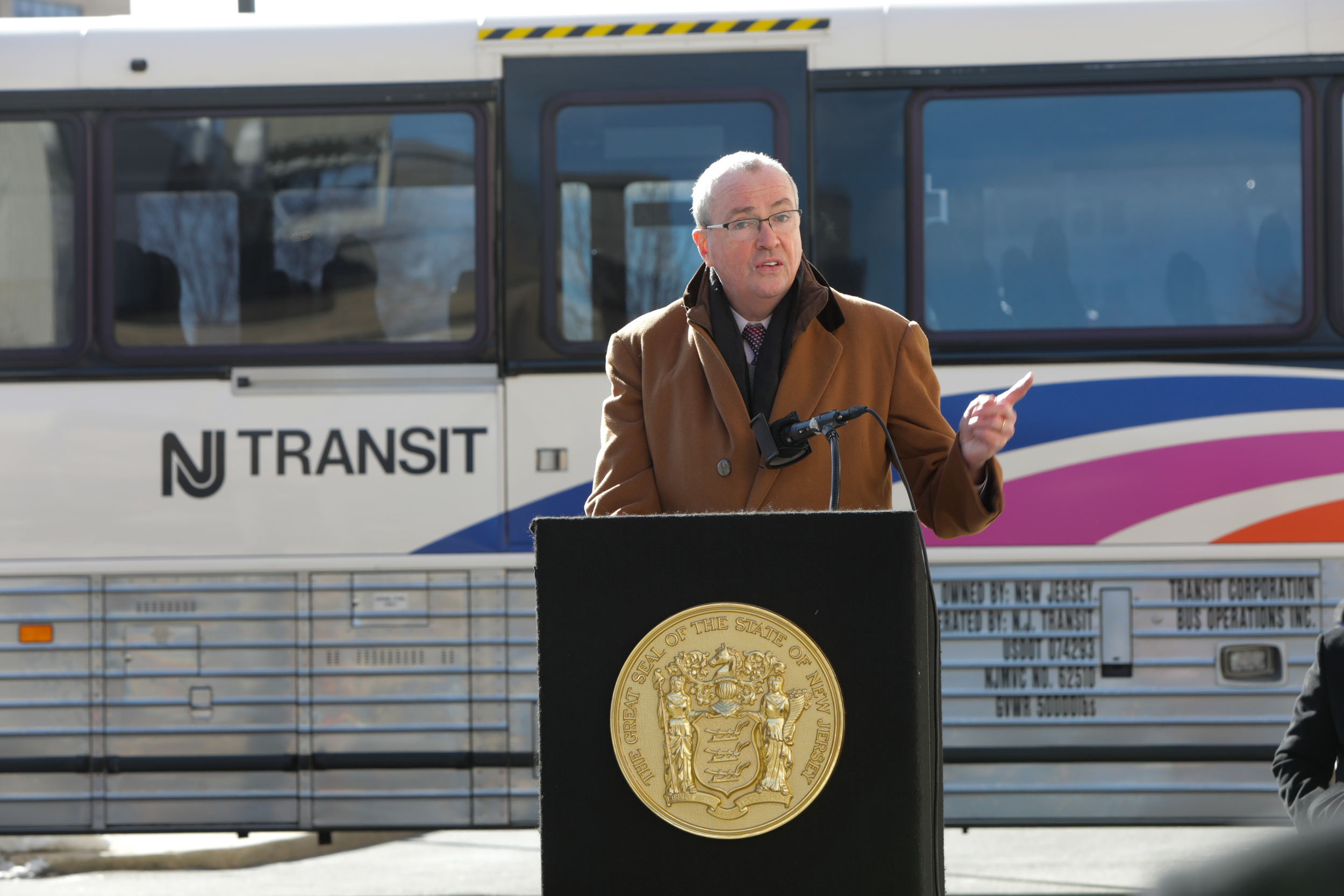 Governor Phil Murphy, Congressman Donald Norcross, New Jersey Department of Transportation Commissioner and NJ TRANSIT Board Chair Diane Gutierrez-Scaccetti, NJ TRANSIT President & CEO Kevin Corbett, Mayor Frank Moran, and local and county officials celebrated the first major step of a $250 million redevelopment of the Walter Rand Transportation Center, the largest transportation hub in Camden County. The Request for Proposal (RFP) for the design of a new facility to replace the terminal will be released in the coming weeks. The initial design phase, once commenced, is expected to take about 9 months to complete.

“In spite of the pandemic’s challenges, Camden is a city still on the rise,” said Governor Murphy. “We are proud to announce a more than $250 million dollar overhaul of the Walter Rand Transportation Center, which will benefit the people of Camden for decades to come. Any modern city needs a modern transportation hub, and with this investment, we are sending a clear signal that Camden’s best days are ahead.”

“The Walter Rand Transportation Center is a vital transit hub and economic engine for all of South Jersey,” said NJ TRANSIT President & CEO Kevin Corbett. “The investments committed today by Governor Murphy will improve safety, support transit-oriented development in Camden, better accommodate growth throughout Camden County, and provide improved connectivity to Camden’s medical, educational, and industrial development areas. These investments will also give us an opportunity to integrate the Center with battery electric buses, building on our aggressive efforts to transition toward a zero-emissions bus fleet.”

"The Walter Rand Transportation Center is a critical convergence point for multiple transit systems and a gateway into New Jersey,” said Camden Mayor Frank Moran.  “The center is outdated and in severe disrepair. Camden residents and thousands of commuters who use this facility daily have been patiently waiting for a modern 21sr century Transit Hub. I commend Governor Phil Murphy, Congressman Donald Norcross, state and county officials and the partners who worked collectively to move this important project forward.  Camden is in the midst of an unparalleled transformation. The redevelopment of the Walter Rand Transportation Center will leverage billions of dollars invested in Camden and will be a key component in the future revitalization of the City and this region."

“This major investment in the Walter Rand Transportation Center will create good-paying construction jobs and ensure that South Jersey residents and essential workers will have access to a safe, reliable and modern transit hub to keep our economy moving,” said Congressman Donald Norcross. “It’s an honor to celebrate this announcement for a center that is such a vital link for our communities. I commend Governor Murphy, Camden County and Camden City for their support and efforts to advance this investment in South Jersey’s economy, and I will continue to fight at the federal level for additional infrastructure funding.”
READ MORE: Governor Murphy Announces $250 Million Overhaul of the Walter Rand Transportation Center in Camden 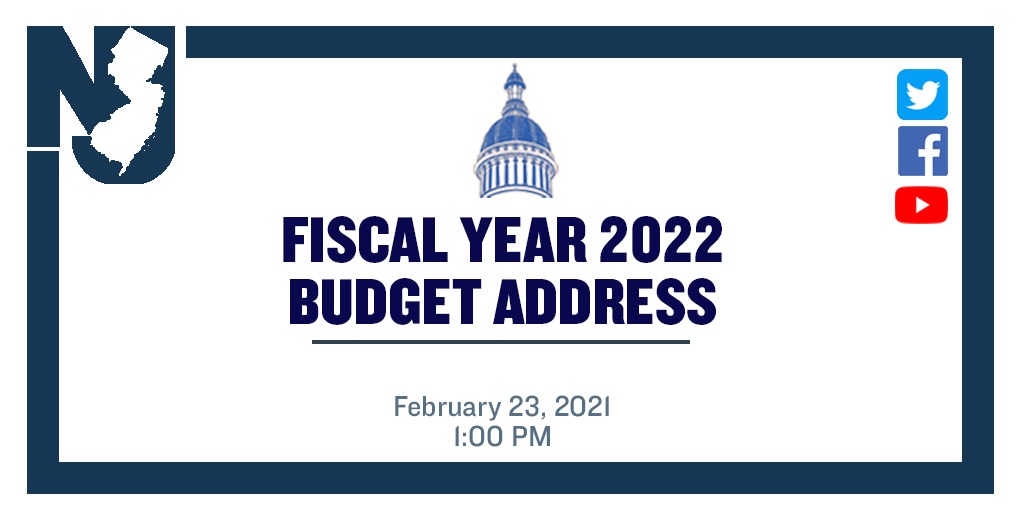 Governor Phil Murphy’s Fiscal Year 2022 Budget Address will stream online and via social media at 1:00 p.m. on Tuesday, February 23, 2021, reaffirming the Governor’s vision for a stronger, fairer, and more resilient economy as we emerge from the pandemic.

“We know this pandemic is not done with us, as the emergence of new variants means we must remain vigilant,” said Governor Murphy. "But even as we continue to confront the pandemic’s challenges, we cannot – and we will not – sit still. Now is the time to put in motion a plan to spark New Jersey’s recovery and get our economy moving forward. I look forward to sharing details about our budget plan that will not just get us through the remaining months of the pandemic, but will supercharge our reemergence from it and the recovery that awaits on the other side.”

Governor Phil Murphy signed Executive Order No. 222. The Order extends the Public Health Emergency that was declared on March 9, 2020 through Executive Order No. 103, which was previously extended in 2020 on April 7, May 6, June 4, July 2, August 1, August 27, September 25, October 24, November 22, and December 21, and again in 2021 on January 19. Under the Emergency Health Powers Act, a declared public health emergency expires after 30 days unless renewed.