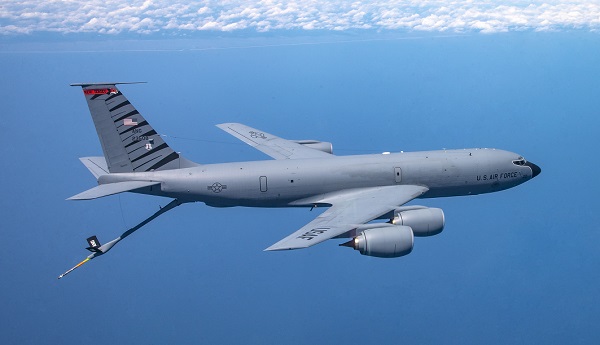 Four turbofan/jet engines, mounted under the wings swept 35 degrees, power the KC-135. Nearly all internal fuel can be pumped through the tanker's flying boom, the KC-135's primary fuel transfer method. A special shuttlecock shaped drougue, attached to and trailed behind the flying boom, is used to refuel aircraft fitted with probes. An operator stationed in the rear of the plane controls the boom. A cargo deck above the refueling system holds passengers and cargo.

The Boeing Military Aircraft Company's model 367-80 was the basic design for the commercial 707 passenger plane as well as the KC-135/A stratotanker. In 1954, the Air Force purchased the first of its future fleet of 732 aircraft. The first aircraft flew in August 1956, and the first initial production aircraft was delivered to Castle AFB, California, in June 1957. The last KC-135 was delivered to the Air Force in 1965.

In modification programs designed to keep the KC-135 flying and refueling into the next century, Air National Guard and Air Force Reserve Stratotankers were retrofitted with Pratt and Whitney TF-33-PW-102 engines. The re-engined tanker, designated KC-135/E, has 30% more thrust, is 16% more fuel efficient, and can carry 33% more fuel then the "A" model.

The KC-135 tanker fleet made an invaluable contribution to the success of Operation Desert Storm in the Persian Gulf, flying around-the-clock missions to maintain operability of allied warplanes. The Air National Guard and Air Force Reserve provide 33% of Air Force refueling requirements of bomber, fighter, cargo, reconnaissance forces, as well as the needs of the Navy, Marines, and allied nations. 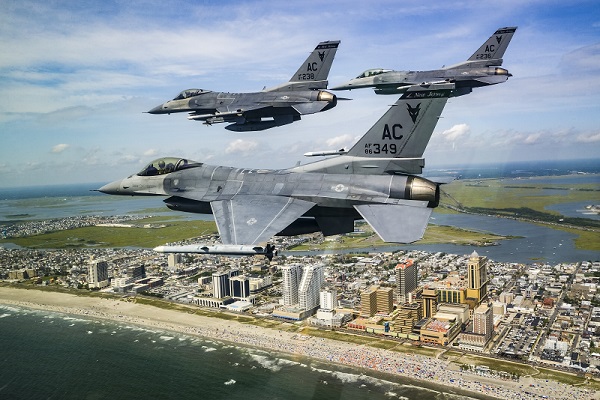 The F-16 Fighting Falcon is a compact, multirole fighter aircraft. It is highly maneuverable and has proven itself in air-to-air combat and air-to-surface attack. It provides a relatively low-cost, high-performance weapon system for the air forces of the United States and allied nations.

In an air combat role, the F-16's maneuverability and combat radius exceed that of all potential threat fighter aircraft. It can locate targets in all weather conditions and detect low flying aircraft or missiles in radar ground clutter. In an air-to-surface role, the F-16 can fly more than 500 miles, deliver its weapons with superior accuracy, defend itself against enemy aircraft, and return to its starting point. An all-weather capability allows it to accurately deliver ordnance during non-visual bombing conditions.

In designing the F-16, advanced aerospace science and proven reliable systems from other aircraft were selected. These were combined to simplify the airplane and reduce its size, purchase price, maintenance costs and weight. The light weight of the fuselage is achieved without reducing its strength. The F-16 can withstand up to nine G's - nine times the force of gravity.

The pilot has excellent flight control of the F-16 through its "fly-by-wire" system. Electrical wires relay commands, replacing the usual cables and linkage controls. For easy and accurate control of the aircraft during high G-force combat maneuvers, a side stick controller is used instead of the conventional center-mounted stick.

The F-16A, a single seat-model, first flew in December 1976. The first operational F-16A was delivered in January 1979 to the 388th Tactical Fighter Wing at Hill AFB, Utah.All F-16's delivered since 1981 have built in structural and wiring provisions and systems that permit expansion of the multirole flexibility to perform precision strike, night attack and beyond-visual-range interception missions. This improvement program led to the F-16C and F-16D aircraft, which are the single and two place counterparts to the F-16A/B, and incorporate the latest cockpit control and display technology. USAF F-16 multi-mission fighters were deployed to the Persian Gulf in 1991 in support of Operation Desert Storm, where more sorties were flown than with any other aircraft. These fighters were used to attack airfields, military production facilities, Scud missiles sites and a variety of other targets. 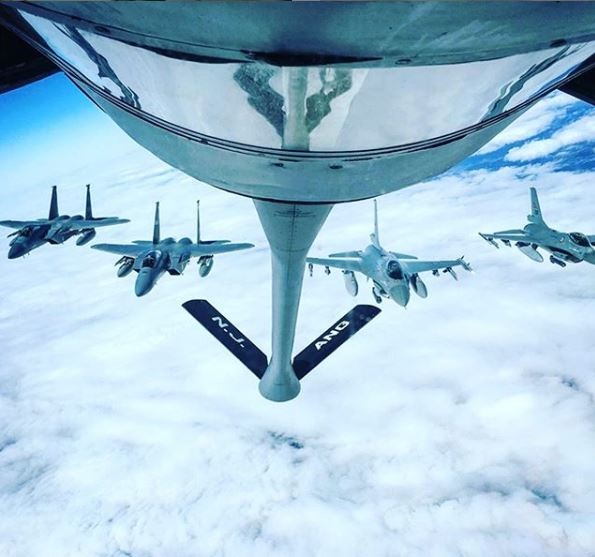