James T. Plousis was sworn in as the eighth chairman of the New Jersey Casino Control Commission on December 26, 2017 after his appointment by Gov. Chris Christie.

A native of Philadelphia, Plousis has a law enforcement career that spans more than four decades prior to joining the commission. It started when he joined the Woodbine Police Department in 1975 and continued when he moved to the Ocean City Police Department three years later. In 1984 he ran for and was elected Sheriff in Cape May County and served six terms in that position. As Sheriff, he was responsible for the operation of the County Jail, Juvenile Boot Camp, courthouse security and a variety of other law enforcement functions.

In 2002, President George W. Bush nominated Plousis to be United States Marshal for the District of New Jersey. Upon confirmation by United States Senate he was sworn in on March 25, 2002. As U.S. Marshal, Plousis was responsible for providing security for federal judges and their staffs at federal courthouses in the state; apprehending fugitives and non-compliant sex oﬀenders; securing and transporting federal prisoners from arrest to incarceration; executing federal court orders; seizing and managing assets acquired through illegal means; and assuring the safety of endangered government witnesses and their families. He oversaw offices in Newark, Trenton, Camden and Atlantic City.

While U.S. Marshal, Plousis served as a Coordinator of the New York/New Jersey Fugitive Task Force which has arrested close to 35,000 violent state and local fugitives and he was the U.S. Marshals’ Service Liaison onsite in New Orleans to assist the local sheriffs with jail evacuations and law enforcement support during Hurricane Katrina. He coordinated the security for the Fort Dix Five Terrorist Trial in Camden. The suspects were all convicted of plotting an armed attack on the Ft. Dix Military Base to kill U.S. soldiers. He has also coordinated two of the largest Fugitive Safe Surrender Programs in the nation, in Newark and Camden where over 6,300 fugitives surrendered safely at local churches.

Under his leadership, the State Parole Board has coordinated a statewide effort in support of veterans who become involved in the criminal justice system. The State Parole Board, in partnership with the American Legion, the N.J. Department of Military and Veteran’s Affairs, and state and federal law enforcement agencies, work to address the increasing segment of the inmate population with prior military service.

Plousis was a member of the New Jersey Sheriff’s Association and served as its president for six years. He was also a member of the National Sheriff’s Association and was on its board of directors for three years. He also served on the board of the Federal Law Enforcement Training Center at Glynco, GA. He is a member of the United States Marshals Survivors Benefit Fund (USMSBF) and has served as the chairman of its executive advisory committee. The USMSBF is a private nonprofit corporation formed for charitable and education disbursements to the surviving family members of active U.S. Marshals, Deputy U.S. Marshals, Marshals Service employees and Special Deputy U.S. Marshals who are killed in the line of duty.

Plousis volunteers his time for Hand to Hand for Haiti which provides humanitarian support to the people of Haiti. He traveled to Haiti in 2014 with a team of nine missionaries who distributed 1,000 soccer balls to children of Haiti.

Plousis is a graduate of Slippery Rock University and of the Rutgers University Public Manager Program. He lives in Ocean City and has two adult children. 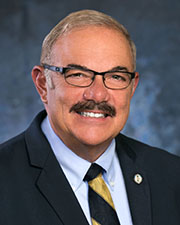